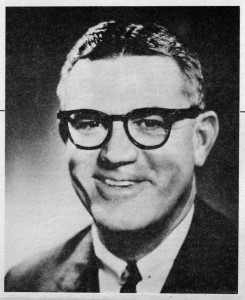 Cornelius “Corny” Schrems was one of twelve original founding members of what is now known as Trout Unlimited; a national organization that was founded on the banks of the Au Sable River in Grayling, Michigan in 1959. Trout Unlimited “TU” started as a group of concerned Michigan anglers who banded together.  From the beginning, TU was built upon its reputation as an organization of conservation-minded anglers who rely upon sound scientific principles to promote quality trout and salmon fisheries for their intrinsic value as reminders of ecological health.

As a local resident of West Michigan, Corny Schrems went about organizing and recruiting for the cause here in the West Michigan area. He captured the interest and assistance of Mr. C.R. “Bob” Evenson and Mr. Blake Forslund. Together they founded the Schrems West Michigan Trout Unlimited Chapter in 1961.

Thank you for your leadership Mr. Schrems!