The Rogue River Home Rivers Initiative is a large-scale program administered by national Trout Unlimited. On this page you’ll find details on its on-going efforts, contact information, and some history of the program. 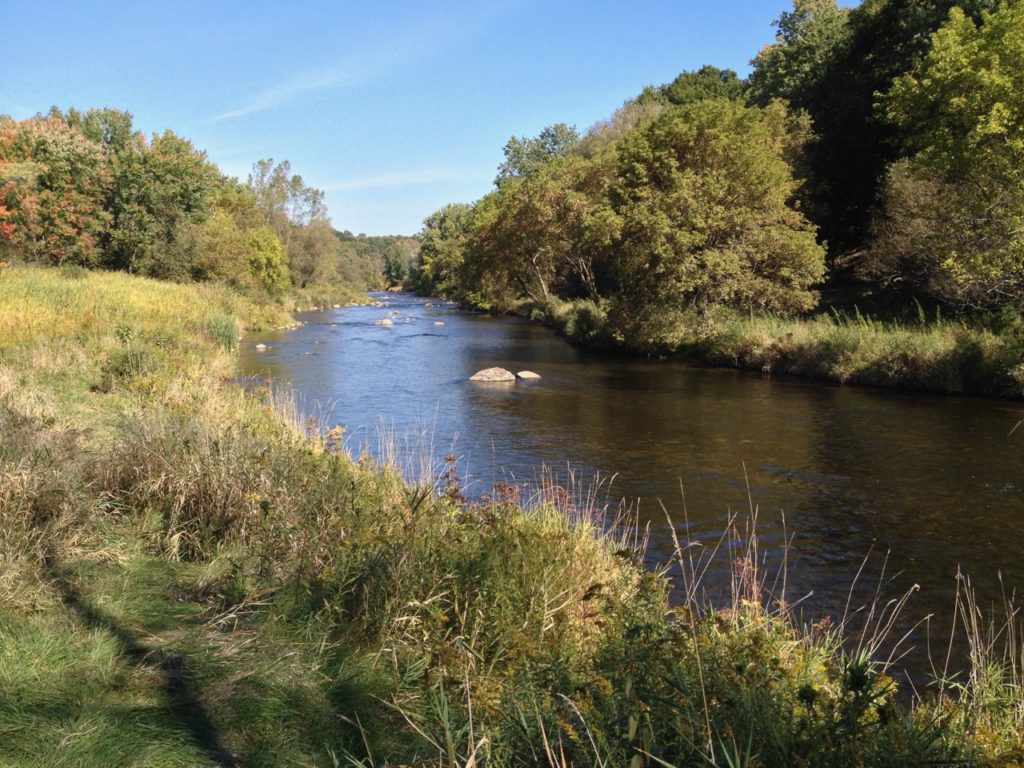 This online presentation with Chris Wood, CEO and President of Trout Unlimited, was held on March 16, 2021.

(NOTE: This article was authored by Jamie Vaughn and first appeared on TU.org. Jamie is Trout Unlimited’s Rogue River Home...

Founding of the Rogue River HRI

Since 1994, Trout Unlimited has conducted a series of impressive, large-scale watershed projects under its flagship program, the Home Rivers Initiative.

In July of 2010, Michigan’s Rogue River was designated as the most recent Home River program.  TU initiated this program based on the premise that everything in a watershed is related and connected, and that watershed restoration requires far more than site-specific treatments.  Each Home Rivers project is a collaborative multi-year effort that combines applied scientific and economic research, community outreach, on-the-ground restoration, and the development of long-term conservation and management strategies and tools.  All Home Rivers projects involve public-private partnerships and have been extremely successful in engaging local communities, demonstrating cutting-edge restoration practices, and leveraging significant resources to benefit the watersheds.

The Rogue River is a tributary of the Grand River and it flows south out of Newaygo County into Kent County, through the city of Rockford and into the Grand River just north of Grand Rapids.  To many fishermen in West Michigan, the Rogue is where we caught our first trout, steelhead, or salmon.  The Rogue has somewhat of a split personality.  The lower river, below the city of Rockford is open year around to trout fishing and is supplemented with healthy runs of salmon and steelhead making this a very popular section.  The Rockford dam blocks the migration of fish upstream and the upper river is more of a classic trout stream.  The watershed is also unique in that the river has both warm and cold-water tributaries with the warm water primarily flowing in from the west, and the cold water tributaries from the east.  A significant portion of the Rogue River watershed is designated by the state as a “Natural River”.

The process of becoming a Home River took a little over two years and started when Michigan Trout Unlimited Chairman Pat Kochanny announced that TU would be coming to Michigan to survey three rivers for possible acceptance into the Home Rivers program at the spring meeting in April, 2008.  On the survey list was the Rogue, the Rifle, and the Pigeon/Black watersheds.  Each local TU chapter hosted a one day tour of their watershed in May, 2008 for Laura Hewitt, TU’s Watershed Programs Director, and Bryan Moore, TU’s VP of Volunteer Operations.   According to Laura, “We had been looking in Michigan for a long time for an opportunity for a Home Rivers project.  The Rogue was in okay shape, but it had significant opportunity for improvement and many good local partners and an active chapter.  Trout Unlimited had been hoping to find an opportunity to develop tools for coldwater protection in an urbanizing environment and the Rogue seemed to be a good opportunity for this”

The “Home River” designation does not become official from Trout Unlimited until the funding is lined up to hire a coordinator for the project.  The local Schrems West Michigan chapter of Trout Unlimited pledged $15,000 towards the project and a private donor also pledged $15,000, but more significant financial support was required.  The first step to achieving this was occurred in the fall of 2009 when the Frey Foundation contributed $60,000.  The Frey Foundation focuses on West Michigan and supports six interrelated aspects of community life: Arts, Capital Projects, Children, Civic Progress, Environment, and Philanthropy.

Wolverine Worldwide Foundation was next to sign up with a contribution of $45,000 in January, 2010.  Wolverine Worldwide is a manufacturer of footwear with their headquarters located in Rockford.  Their foundation is actively involved in supporting charitable organizations with a focus on education, the environment and youth and family.  “They are a riparian owner along the Rogue River and they wanted to be involved in the project from the start.  They are a strong supporter of the community, and CEO Blake Krueger is an angler” according to Glen Blackwood, TU member and owner of Great Lakes Fly Fishing Company in Rockford who helped make some of the introductions to the Wolverine Worldwide and Wege Foundations.

The clinching contribution came from the Wege Foundation in May, 2010 with their contribution of $127,000 which will be shared with one of our partners in the project, American Rivers.  American Rivers is a nonprofit organization that supports river protection, river restoration, clean water, and water supply to benefits people, wildlife, nature and the communities that rely on healthy rivers.  Peter Wege, founder of the Wege Foundation describes the foundations principles as “the Six Es: Education. Environment. Ethics. Empathy. Ecology. Economy.”

Trout Unlimited is currently in the process of hiring a coordinator for the project and our hope is to have one in place and working with our many partners by the end of this summer.  There are three broad goals for the Rogue Home Rivers program:

The next few years will be an exciting time on the Rogue River as Trout Unlimited brings its watershed restoration philosophy and invests its resources into protecting one of Michigan’s popular local rivers.  There are over 750,000 people located within 30 minutes of the river making it a very precious cold water resource that is enjoyed by many.

For more information on any of our partners, go to their web sites: