The Rogue River is a major tributary of the Grand River and flows generally north to south through Rockford, Michigan. The watershed is 234 square miles and covers counties, though most of it is in northwest Kent County.

Much of the river is warm water, especially in its upper reaches. As it approaches the Grand River, smaller tributaries and ground water springs turn the river colder and it can support good populations of trout. Additionally, the river gets seasonal runs of steelhead, Chinook salmon, and Coho salmon all the way up to the dam in Rockford.

The river has long been a focus of efforts from SWMTU and other area environmental groups. Current efforts include work done by the Rogue River Home Rivers Initiative and the Kent County Brook Trout Study.

Trout Unlimited national did a comprehensive temperature monitoring effort in 2021 on the Rogue River watershed. You can find a map displaying the results of the 2021 Temperature Monitoring Survey here.

The data is displayed based on Maximum Weekly Average Temp (MWAT). This statistic is often used by researchers to understand thermal habitat suitability for trout and other coldwater species. It is the highest average temperature for any 7-day period during the monitoring effort. Generally, for trout, an MWAT below 66 is fantastic, 66-70 is good, 70-73.4 is marginal, and greater than 73.4 are not good temperatures for trout. Areas that have higher temperatures may still support trout populations but usually at much lower abundances. If you click on the site marker, a box will pop up that will also show the July average, which is the metric Michigan DNR uses to evaluate stream temperature.

A few observations from the data.

These data are being shared with various partners including DNR, the Rogue River Watershed Partners, the Land Conservancy of West Michigan, the Lower Grand River Organization of Watersheds, and Kent Conservation District to aid in the prioritization of restoration and protection efforts in the watershed. 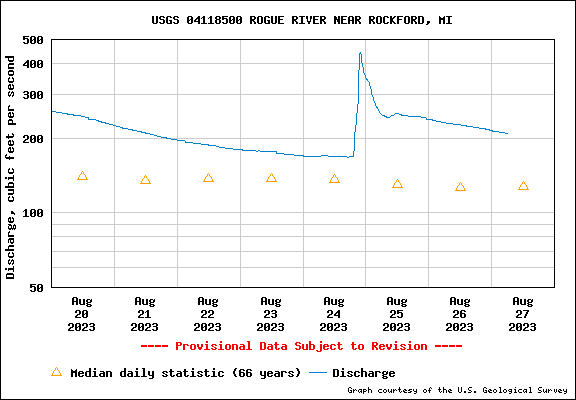 The following images represent two sides of a printable Rogue River Hatch Guide. It shows some of the common hatches that occur and access points along the river. Click on each image to view a larger version.

Reports from the Rogue River

This online presentation with Chris Wood, CEO and President of Trout Unlimited, was held on March 16, 2021.

The Tree Army, made up of staff and volunteers, planted thousands of trees along Michigan’s Rogue River to enhance the resilience of this important coldwater fishery.

(NOTE: This article was authored by Jamie Vaughn and first appeared on TU.org. Jamie is Trout Unlimited’s Rogue River Home...

A big thanks to the many volunteers who turned out for an early morning trash cleanup on the Rogue River.

Trout Unlimited has received funding from the U.S. Forest Service, through the Great Lakes Restoration Initiative, to plant nearly 17,000 trees along coldwater streams in Michigan.