When steelhead come up the large rivers of Western Michigan in the fall, they are inclined to lie close to the bottom, near one of the main lines of current where they take up a resting or holding position. Those current lines can be identified easily because that is where the bubbles concentrate on the surface.

In the fall, steelhead like water that is about three feet deep and moving at about three feet per second on the surface. The water is flowing more slowly near the bottom and the fish can rest comfortably there. If there is a place in that holding water where there are little waves on the surface that don’t move downstream with the current, that is the most likely place for the steelhead to be. That type of water is ideal for streamer fishermen.

You can fish a lot of water with a streamer by casting it across and letting it swing downstream with the current. But the best way is to concentrate on having the fly doing exactly what you want it to do when it gets to where you expect the steelhead to be. That means the fly should be pointing generally upstream, and it should not be going very fast. It should not be following a bow in the line, and with a floating line it sometimes takes several mends to get the fly down and keep the bow out of the line.

Letting a streamer run downstream along the edge of the current behind a bow in your line is a good technique for smallmouths, and it sometimes works very well on big browns, but it is not the most likely way to catch steelhead. It should be tried before you move on, but the fly should generally be fished dead drift and sinking as it goes downstream, until it gets to where it will swing around below you on a nearly straight line. The most likely time for a fish to take is when the fly begins to come up from near the bottom and to swing around below you with the current.

Fishing streamers for steelhead in the fall can be done with a floating line, if you add a moderate amount of weight to the leader, or you can use a sinking line. One that sinks from three to six inches per second will work fine.

When fishing streamers with a floating line, I typically use a two-piece leader. I use a butt section of about four feet of .017 nail knotted to line. I tie a small swivel to that, and attach my tippet of about two and a half feet of eight or ten pound test to the swivel.

Normally I wrap some lead wire around the swivel to get the amount of weight I want. Split shot works pretty well if it is attached to the heavy butt section, but even when it is clamped down tightly, it still comes off while you are making long casts, or when the fly gets hung up and the line is stretched and then suddenly comes free.

Most of my steelhead fishing is done with a nine-foot, eight-weight rod. 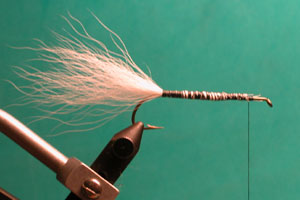 If I was to pick one all- around color combination for a streamer, it would be yellow and gold. It works all year, and it attracts every kind of gamefish in Michigan. But in the fall, the most productive combination for steelhead has been white and silver. If you have a favorite smelt imitation about two and half to three and a half inches long, it will be a good steelhead fly in the fall.

My favorite is a modifed form of the blond series of streamers developed years ago by Joe Brooks. The most productive of that type of fly that I have used is tied this way.

Tail: White bucktail extended about two and a half inches out behind the hook. The bucktail is tied down solidly, nearly the full length of the hook shank, and it is the base over which the body is tied.

Throat: Silver flashabou that reaches almost to the hook bend. Take half the amount of flashabou you think would look good on the fly and cut it twice as long as you want it. Tie the flashabou in near the middle of the clump. Wrap the thread over it about eight times and then double the flashabou back and tie it in solidly. That way the slippery flashabou will never pull out. 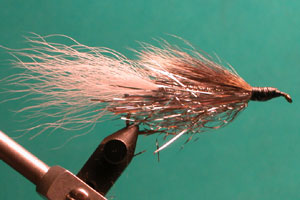 Wing: Gray squirrel tail tied the length of the hook shank. The wing has to be short enough so it will never foul on the hook bend when you are casting. Tie it down solidly. Do not try to make a nice short trim head. Squirrel tail is another slippery material and it requires a lot of good tight wraps to keep it in place.

The head on a size-two streamer should be about a quarter of an inch long.

A yellow and gold fly of the same pattern can be tied using yellow bucktail, gold mylar tubing, gold flashabou, and a fox squirrel wing.