My friend Evert VanderWal spent a lot of the first summer after he retired fishing the Muskegon River. He fished almost every day and he developed a system of fishing soft hackle flies that has worked extremely well on the Muskegon, the Manistee, and almost everywhere else we’ve tried it.

The flies he uses are simple and easy to tie, and his method is easy to learn. He is better at it than I am, and when we fish the Muskegon together, he generally catches more fish than I do.

I tend to be somewhat impatient, and I’m a fly changer by nature. After I go a while without any action, I start changing flies, and then I finally rig up so I can fish a streamer. Sometimes I’m rewarded for that with a pretty good trout, but more often than not, Evert catches several nice fish while I’m fiddling around with my tackle. He has the patience to stick with what he knows will work, and if the conditions are reasonable, he will catch more trout than I do, and he usually gets the biggest fish of the day. 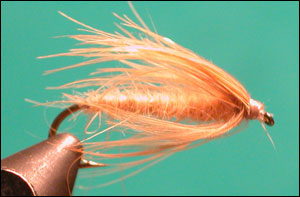 His flies are tied on size fourteen or sixteen light wire dry fly hooks. Poly dubbing or spun fur, whichever you like best, can be used for the bodies. Evert uses poly dubbing and I like spun fur. The bodies are tied like dry flies with no tail. Small soft body feathers are used for hackles. I like woodcock body feathers. One of the three best patterns has a tan body and a light honey colored feather from a woodcock’s breast. I use hare’s ear for the body. Evert uses tan dubbing. Another good one has a body of light beaver brown and a mottled feather from a woodcock’s back for hackle. The third has a muskrat gray body and a light colored feather from a woodcock’s belly. Since the flies are tied on light wire hooks with dry fly material for bodies they will float on top, or in the surface film.

The fly is generally cast across and slightly downstream. At first the fly is fished dead drift on the surface as an emerging caddis. Sometimes a little movement, even a foot-long pull over the surface, will bring a slashing strike from a fish. When the current pulls the fly under, it is allowed to swing around in the current like a nymph or wet fly. Some days, the fish will only take the fly when it’s underwater on the swing. On other days, it seems like the larger fish will only take it on the surface. I never put any floatant on that type of fly. They will typically float in the surface film again after a false cast to get the moisture out. A floating soft hackle can be difficult to see on broken water because it rides right in the surface film, or sometimes just under it. If a fish rises anywhere around where I think my fly might be, I tighten the line and make a miniature strike that will only move the fly a few inches, just in case the rising fish has taken my fly. If the rise wasn’t to my fly, sometimes the little bit of motion caused by my strike will attract a trout’s attention and then the fish takes the fly.

A soft hackle with a spun fur body works very well as a dry fly on the surface, and when I see a nice fish rising, I generally make my cast slightly downstream and put the fly on the water about two or three feet above the fish. If it’s a big fish, sometimes I don’t fish the cast out underwater after the fly sinks. I just concentrate on the one rising fish.

If the fish won’t take the fly on the surface, I cast farther up above it and pull the fly under so it drifts down to the fish just below the surface, and that often works. A floating soft hackle works very well when it’s cast upstream and fished strictly on the surface, and it works very well when it’s cast downstream and across and pulled under as soon as it’s on the water. But by far the most effective way of fishing the floating soft hackles when wading, or anchored in a boat, has been to let them drift as far as they will go on the surface and then fish out the rest of the cast with the fly as a nymph. I let the fly hang in the current below me a few seconds before picking it up. Then I dry it with a false cast or two and put it back on the water again. I have taken some really nice browns and rainbows with the fly just hanging downstream in the current an inch or two below the surface.

I have tied the floating soft hackles in a lot of different body colors, light beaver brown, and muskrat seem to be the best early in the season. Tan or hare’s ear bodies begin to produce better in the summer, and it’s always good to have a couple flies with black bodies and hackles that are mottled black and brown. A fly with a black body and black colored feather sometimes works very well in the early season when the Chimarra caddis are on the water. They usually emerge at the same time of year that the Hendricksons do, and then again in the summer during early July, and again in late August. VanderWal’s soft hackle patterns are designed to imitate caddis, but they pass well for any kind of emerger, whether it’s a mayfly or a caddis.

Typically, many of the smaller body feathers of a woodcock are just the right size and color for those flies, but almost any small soft body feathers will work, and gray partridge (Perdix perdix), which are also commonly called Hungarian partridge feathers are very good. Partridge and woodcock feathers both require careful handling with the hackle pliers, but they are very durable once they are tied in place.

VanderWal’s patterns are very effective. In my never-ending quest to improve a fly pattern by adding something to it, or changing something, I have improved some of them to the point where they won’t catch fish anymore. But so far I have not been able to do anything to improve his floating soft hackles, or to prevent them from catching any fish.