The carp come onto the long flat to feed and the smallmouths shadow them.

Sometimes there will be two or three bass swimming along with a carp. Generally the bigger the carp, the bigger the bass with it. The carp work the bottom and stir things up. The bass feed on whatever the carp chase out and can’t catch right away.

The flat is above an island in the Grand River. The sun was way over in the west when I went out one July evening. The air was starting to cool down. The sky was blue overhead and then it paled away into the haze on the horizon. The flycatchers were flying out over the river, having their dinners. Just before sundown, a heron flew past me, croaking. The Ottawa Indians used to say the heron flew out in the evening and croaked loudly to summon the night. A doe with two fawns came down to the river to drink.

When I was a boy my Sunday school teacher said it always got so still and quiet at sunset because that was when the animals all stopped whatever they were doing and said their prayers.

It was that magical part of a summer day between sunset and darkness that the British call Tom Fool’s hour because they say any fool can catch trout on flies then. But carp are harder to catch on flies than trout are.

I was using a small crayfish pattern tied with martin fur and when I saw the movement of a fish coming my way, I tried to guess where it was going. It was a big carp and there was good size smallmouth on the other side of it from me. I cast the fly well ahead of it and when the fish got close to it I hopped it about two inches. There was a huge boil as both fish raced for the fly. The line twitched, and I struck. I saw the carp shake its head.

The smallmouth tried to grab the fly that was part of the way out of the carp’s mouth away from it. Then silt obscured everything, and the carp raced through the shallow water and off the flat. I discovered that those old butterflies that used to hang out in my stomach when I was kid had not all flown away. They were just waiting for something exciting to bring them out of their cocoons.

I have taken quite a few good size carp on flies, but that fish was noticeably bigger than any I have caught. An eight pound test tippet and a hundred yards of backing were nothing to that fish. I ran about fifty yards across the flat after it, but it was gone in less than a minute.

Two flies have been very good flies for carp for me, a martin fur crayfish pattern, and the picket pin. I tie both of them on keel hooks, but they can be tied on regular hooks. If the hook shanks are heavily weighted, they will ride upside down on the bottom and be fairly weedless. 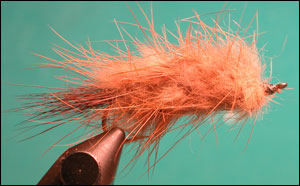 The martin fur crayfish pattern is tied like this.

Hook- a size eight keel hook, or any hook with a down eye and a shank that is five or six times as long as the gap in the hook. The hook is weighted with at least one full length wrap of lead wire.

Tail- a pinch of martin fur with the guard hairs removed.

Body- martin fur with the guard hairs still in it. Make a four inch loop in the tying thread after tying in the tail. I wrap the thread over the loop four or five times and then wrap it up to the head of the fly, leaving the loop still at the tail. Clip a good size bunch of fur and put it into the loop so it is spread out nearly the length of the loop. Keep the clipped ends as even as possible. Twist the thread until the fur
stands up and then twist it some more. Wrap it forward to make the body. Quite a few different furs will work if you can‚t find martin fur. Mink is good, and so is any other brownish colored fur from animals of the mink family. 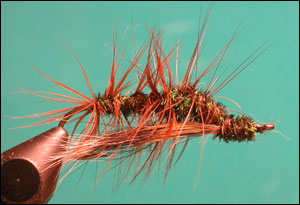 The picket pin is a peacock herl fly and it is tied like this.

Hackle- brown, palmered the length of the body. Four wraps is about right.

Wing- gray squirrel. If you weight the fly heavily, tie the wing on the underside of the fly, so it points toward the point of the hook and the fly will ride upside down when it is in the water.

Head- peacock herl that is like a continuation of the body. It goes over the part of the wing that is tied in and continues forward almost to the eye of the hook.