In the second summer of their lives, when they are about 5 or 6 inches long, smallmouth bass begin to feed heavily on minnows, and for the rest of their lives minnows make up a majority of the food they eat.

Smallmouths like crayfish, and they eat them whenever they can catch them. But crayfish are nocturnal and they are very good at hiding where the bass can’t get at them, so they are not a reliable source of food for smallmouths. They will eat an extraordinary variety of things, but minnows are what smallmouths expect to eat, and a good bucktail with a little flash will catch smallmouths all season long.

With fish, speed is proportional to length. The larger a fish grows the faster it can swim. Smallmouths have a top cruising speed of about ten times their length per second and from there, they can make quick power bursts up to about half again that speed. They can accelerate quickly and make very sharp turns at high speed, so they can easily catch any small fish they find out in the open. The broad soft tails that give them such fast acceleration also produce tremendous power at a fairly slow beat, so the fish don’t use up a lot of energy when pursuing their prey. That fast acceleration and the ability make sharp turns at high speed make them very efficient predators. When they see something they want to eat they pursue it until they catch it or it gets away. The slow beat of a smallmouth’s powerful tail is very noticeable when you are playing a fairly large fish, and it is sometimes mistaken for the fish shaking its head.

Ordinary size smallmouths can catch and eat some pretty big minnows, but their food preference seems to be for fish that are about one-seventh their own length. Smallmouths from fourteen to twenty inches long are generally feeding on minnows that are two to three inches long. Flies in that size range will catch the average size fish, and they are still
attractive to the largest smallmouths.

Feeding smallmouths spend a lot of time in shallow water. The most common mistake fly fishermen make when they fish for smallmouths is to fish the same kind of water that bait and hardware fishermen do. Most fly fishermen will catch more and bigger fish by changing their ideas about where to fish than by developing better techniques for fishing the old reliable deep water pools. The quiet shallow water near the bank is where smallmouths go looking for minnows.

The color of the fly doesn’t always matter when you are fishing for smallmouths, but when it does, it matters a lot, and yellow is by far the best color for smallmouth bass streamers. Smallmouths, and large trout that live in rivers, prefer to chase minnows downstream if they are going to pursue them, because their speed is much greater than that of their prey, and a fish cannot maneuver as well when it is going downstream. So it becomes a race that the larger predator usually wins.

It seems to me that the faster I fish a streamer, the more smallmouths I catch, but nearly all of the very largest smallmouths I have hooked have taken the fly when it was moving at a leisurely pace. The best smallmouth fly I have ever used is tied this way. 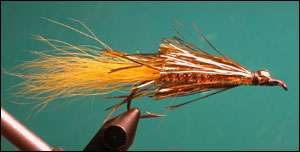 Tail- Yellow bucktail tied so that it extends about an inch and a half beyond the hook. The bucktail is tied down tightly full length on the hook shank and it is the base for the body.

Body- gold mylar tubing. The strings are removed from inside the tubing and it is wrapped around the body like heavy duty tinsel.

Wing- gold flashabou. Take half the amount of flashabou you need for the wing and tie it tightly in the middle of the bunch. Use eight or ten wraps and then fold the flashabou back and tie it tightly, leaving a small forehead on the fly. Keep the wraps back and do not tie the head all the way to the eye of the hook.

When this fly is tied properly it will not sink quickly. It has almost neutral buoyancy, just as a minnow does.