The farther upstream steelhead go, the more likely it is that small flies will be needed to catch them. If the water is very clear, or shallow, or cold, or the sun is shining brightly, it is more likely that an anadromous fish will take a small nymph or a single egg fly, than it is that the fish will take a larger fly, such as a streamer or wooly bugger.

One of the most common things I hear streamer fishermen say when they are fishing to fish on the redds is, “They keep following the fly, but they won’t take it.” What often looks like a fish following a streamer is really a fish backing downstream to get out of its way, and then returning to its place on the redd.

Anadromous fish become very active in the changing light of dawn and dusk. In the spring and fall when the water temperature is in the comfortable range for them, early and late are the times of day when steelhead are most likely to take a fly. But in the winter, when the water temperature is cold, the small rise in temperature that occurs in the afternoon, and peaks about 4:00 pm is the most likely time for a steelhead to take a fly. 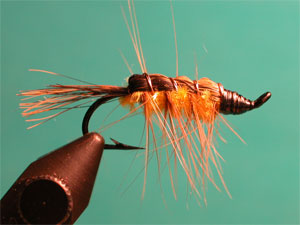 The spring wiggler, which was tied to imitate a Hexigenia nymph, has been around for over fifty years. Steelhead have been caught on it every winter since it was developed, and it will catch some more steelhead this winter. It was originally tied by the owner of Spring’s bait and tackle in Muskegon and it is the standard steelhead fly stocked by tackle stores today. The first ones were tied with yellow chenille for the body, but today they come in almost every possible body color.

Tail – fox squirrel tail. The squirrel tail strands are used both as tail and overlayment for the body. It is tied in tightly nearly the full length of the hook shank, and the tail should extend out farther than it will finally end up. Tie in a piece of gold wire, and a nice soft brown hackle.

Hackle – wrap the soft brown hackle the full length of the body. The body should be about five-eighths of an inch long with about four wraps of hackle. Hackles are generally longer today, and more couple more wraps is fine.

Overlayment – take half to two-thirds of the strands of the tail and pull them forward over the back. Tie them in place and then wrap the gold wire over the strands on about the same path as the hackle was wrapped, to segment the fly and strengthen it. Trim it and tie it all off. Trim the tail fibers to the length you want them. 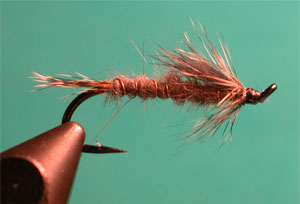 In late winter and early spring, small early stoneflies will crawl out on the shelf ice to hatch. If there is no ice they crawl out on the shoreline. We have several different early stoneflies in Western Michigan, but they are all small and nearly black. Every imitation of an early stonefly eventually ends up being tied too large. We always worry that the steelhead won’t see the small nymph we are offering them. But steelhead notice everything that comes near them in the water and those steelhead made a living eating small nymphs when they were in the river the first time. They can see them very well and they recognize them as one of their early food sources.

The best of the early stonefly patterns that I have used is tied this way.

Tail – about six strands of gray squirrel tail, tied in so they extend a quarter of an inch beyond the hook.

Body – iron blue dun spun fur. The body should be thin and about a half inch long, which is bigger than the naturals. 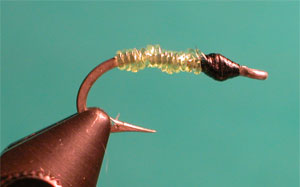 Green Rhyacophila caddis patterns work good for steelhead and resident trout on the Muskegon. A new one I have been tying is easy to tie and it catches fish. I tie it on heavier hooks when it is meant for steelhead. It is tied this way.

Body – twenty pound test Stren hi-vis green catfish line. The line is tied in at the head and wrapped about three times going back to the bend in the hook. Then it is wrapped back to the head to shape the body.

Head – the black tying thread wrapped heavily around to cover the two ends of the hi-vis line.