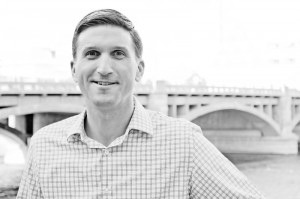 Jeff Edwards spent most of his childhood in a small Northern California town on the banks of the Eel River, where he fished for trout with his father.  Jeff later joined his mother in Southeast Michigan, graduated high school and enlisted in the Marine Corps.  After returning home, he enrolled at Central Michigan University where he studied environmental science and land-use planning.  Jeff began his career as an environmental consultant in Detroit, eventually moving to Traverse City and opening an office for his company.  While in Northern Michigan he learned firsthand the importance of preserving natural areas and open spaces, while directing development to existing downtowns.  Jeff re-experienced the joys (and frustrations) of trout fishing on the Boardman and Manistee Rivers.  He later transferred to Grand Rapids, where he works with several West Michigan communities, corporations, and non-profit organizations.  He lives on the city’s northwest side with his wife, Heather, and son, Asa.