Many reaches of the Coldwater River contain high-quality aquatic habitat and healthy fish populations.  Thirty-two species of fish, including three species of trout, are known to inhabit the river. Deep pools, clean riffles and large woody debris are prevalent. The stream is very productive and the macroinvertebrate community is excellent.

However, the reach of river adjacent the Dolan Property, which is owned by Schrems, has been historically dredged and consists of a straight, incised, wide channel with uniformly shallow water and little to no woody debris or other cover for fish.  Streambank erosion is present to varying degrees throughout the reach.  Aquatic habitat is severely limited and the reach is barely meeting its coldwater designation. With exception of the lack of quality physical habitat, all other stream attributes including water temperature, dissolved oxygen levels and the macroinvertebrate community are conducive to supporting trout populations. 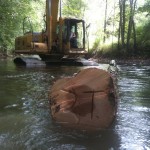 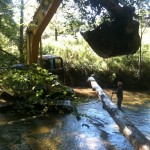 Along with its partner, the Coldwater River Watershed Council, Schrems identified the Dolan Property as a high priority for improvement and began seeking project funds in the fall of 2009. Successful in the effort, Schrems received a $20,000 grant from the United States Fish and Wildlife Service and $40,750 grant from the National Fish and Wildlife Foundation to supplement approximately $66,250 of local cash, materials and in-kind match to improve aquatic habitat on the Dolan Property. The project is located in Sections 34 and 35 of Bowne Township, in southeast Kent County, Michigan

Severe limitations to a healthy trout population in the project area (approximately 2,800 feet of stream) were lack of deep water, woody debris and overhead cover. Based upon this understanding, log structures were designed to emulate naturally occurring river debris and provide additional habitat.  Unlike natural log jams or randomly placed logs, the structures were designed in an orientation to reduce bank erosion and navigational hazards.  Significant base flow in the Coldwater will ensure that the logs remain submerged, thereby preventing decomposition of the wood.  Logs of suitable tree species and desired dimension were available on the Dolan property. 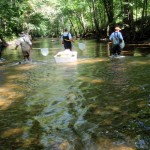 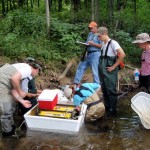 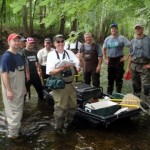 Here are the preliminary numbers for 2011: We conducted two shocking runs; the first we captured 47 browns and two rainbows. The second run we caught 40 browns, seven of which were marked the first pass. This gives a population estimate of 246 fish (+/- 49) in 1,000 feet of stream, or about 1,300 per mile. Largest fish was 13″, though we caught a few up to 15″ outside of our structured sampling site. The good news is that we had 32 trout under six inches, that are likely wild…even a handful of 2-3″ fish that would have been spawned last fall.

Additional monitoring will include macroinvertebrates, physical habitat and morphology (channel shape). Monitoring will continue for the next four years.